What can you do when your opponent makes several questionable "out" calls?

“Bad Calls” during matches is a three step process:


The coach (line judge) will stand by the net and watch the remainder of your set. You and your opponent(s) will continue to call the balls in or out but if you feel another line call is questionable, ask the line judge and they will either overrule the bad call awarding you the point or if the call was a good one, then the point stands.


What should you do when someone's tennis ball comes rolling onto your court?
If you have no chance for a ball and a ball rolling onto the court would have made no difference, do the right thing -- give the point to your opponents.

One can always make a case that a player could have made some play on the ball when this happens. Technically, players may call a let (re-do) if the point had not been completed when the hindrance of the stray ball from another court arrived. However, a good sport knows if they had a play or not, and a good sport knows the difference between a legitimate hindrance and taking advantage of a situation.


What happens if the ball hits a player outside the court without a bounce?
It doesn't matter whether the player is inside or outside of the court, as long as the player touches the ball with his body or clothing, except her racket, she loses the point.


Stay In It!
Always remember that no matter how big of a lead you and your partner may have during your set, do not get overconfident and celebrate early. Your opponents can easily gain momentum while you have your guard down, start winning one game after another, then tying the score and if you're not careful, run away with the match. Stay in it! Like the old saying goes, "It ain't over till the fat lady sings." but in this case, "It ain't over till you've played that last point and you've shaken the hand of your opponent up at the net."
"A team is only as strong as its weakest link." Each part of the whole has the power to influence the others for good or bad. Forget ability and talent, because talent doesn't sweeten the tea! Look at effort and attitude. Again, do what you can do and do it well all of the time, on or off the court. When each part does this and pulls her weight for the whole without reservation or hesitation, then, and only then, is there a team.

If you are having a bad day and nothing is working, hang in there and give your partner a chance to perform. Don't give in. Make as many balls as you can to lengthen points. Without stalling or exhibiting poor sportsmanship, take your time between points and on changeovers. Keep your body language positive and let them believe you are always confident and poised.

Be the first one there and the last one to leave. Set examples with your strengths. Lead with confidence in those strengths and follow with enthusiasm in improving your weaknesses. Most importantly, do all that you can do every time out and every day, so that the other parts of the whole know that they can count on you when it gets tough. Define your role and roll with it. Pull your weight and, when you must or can, lighten the load for someone else. Make your part count and add it to the whole.

- Paul Thomson, head coach women's tennis, Drake University
Practice
Every ball counts in practice and in matches. Hit every ball with an assertive purpose and meaning. In practice, neither you or a partner can improve by just going through the motions, pushing and spraying balls around the court. Challenge them and yourself by pushing through the comfort boundaries.

Matches
Every ball counts in matches for no other reason than to send your opponent a message. "You are going to have to beat me if you want this one. You are in for a fight." Sometimes that fight alone is more than they want. Or for your team mates they see your fight and it bleeds into their courts.

Stopping a match from slipping away

What to do against a Retriever
A retriever (or pusher) is someone that spends their entire time at the baseline, gets to all the balls and sends them right back. To beat this type of player, you will need a lot of patience cause you're in for the long haul. Here's what you'll need to do:

Player that attacks your Backhand

Player with a Weak Serve

Two up means that both players are positioned at the net. This is the best of the three because you are offensive and can cover most of the court from this configuration.

The one wild card is the lob. Because there is nobody there to back you up, covering the lob can be tricky for most people. You must learn to recognize the lob earlier by watching the opponent’s court position and racket face.

For example, if you've come in behind a deep approach shot or hit a deep first volley and you see your opponent back up, odds are you will see a lob. Anticipation is the key to covering the lob effectively.

Two back means that both players are positioned on the baseline. Although most of the court is covered and you do not have to worry about the lob, this is not considered as effective as two up because it is difficult to be offensive from the baseline in doubles.

This configuration should be used if you are and your partner are not good volleyers, or at times when your opponents are moving a lot at the net and outplaying you from there.

Then the best bet is to step back to make it more difficult for them to hit winners and to make sure you don’t go home with a bunch of bumps and bruises courtesy of the other team drilling you with the ball.

One Up - One Back

One up, one back means that one player is standing at the net while their teammate is on the baseline. This is the least desirable of the three configurations mainly because there is a big gap left open in the court right down the middle.

As long as the ball stays in front of the player at the net, it is not as big a problem. But if the pattern switches and the ball is cross-court from the net player, then you are in trouble.

It also makes poaching (the opponents net player crossing the middle of the court to intercept the ball) more effective because there is a big open target to hit to when the opponent gets the ball.

Many times you will find yourself caught in a one up, one back situation. Don't panic, it's not the end of the world. But do try to get up to the net with your partner at the earliest opportunity to be more aggressive.

If you don’t feel comfortable doing this because of the level of your volleys, then work on your volleys until you do feel comfortable. You will also find that the more often you move forward to the net, the easier it will become to see the lob coming before your opponent even makes contact with the ball.

To make things easier, I put together the illustration below. If you're still confused, don't worry. We'll go over it during practice. 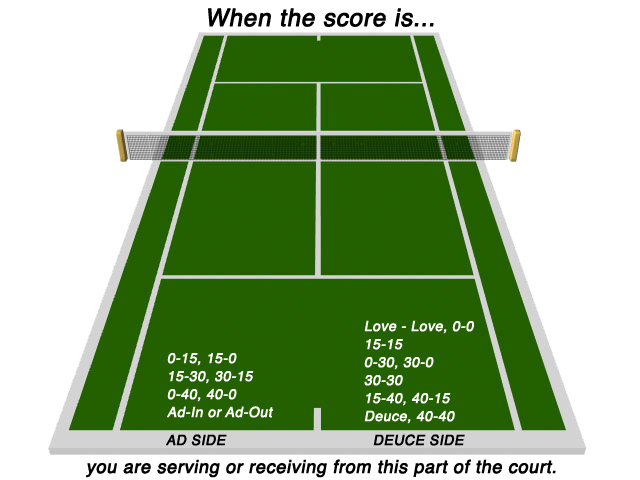